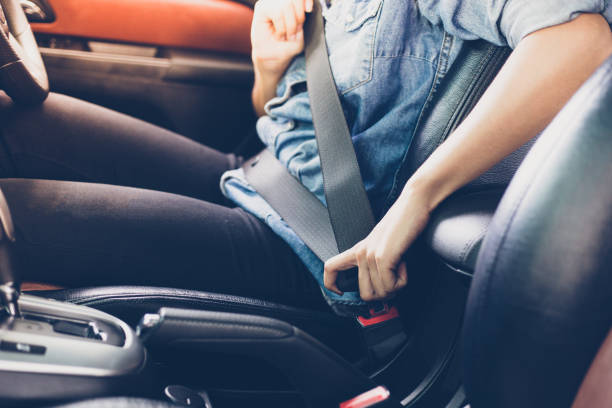 This blog will explore the history of the seat belt law in Massachusetts, why we wear seat belts, and how the decision to wear a seat belt, or not, may impact your personal injury case.

It was not always the law for passengers in motor vehicles to be required to use seat belts in Massachusetts.  Who remembers the “Click it or Ticket” road signs appearing all over the  Massachusetts Pike?   “Click it or Ticket” still is a National Highway Traffic Safety Administration campaign aimed at increasing the use of seat belts among young people in the United States.  The focus of the campaign on youth was due to the statistics showing a greater frequency of non-seat belt users in the younger generation.  The campaign relied heavily on targeted advertising aimed at teens and young adults.  The “Click it or Ticket” campaign has existed at the state level for many years.  It began to appear in Massachusetts about the time seat belts were becoming mandatory.

Before 1980, only 11% of people in the United States used seat belts.  New Hampshire had the historically lowest seat belt usage.  Massachusetts, surprisingly enough, was the state with the second lowest usage.

Opposition to the effort to enact seat belt laws in Massachusetts was primarily based on the belief that requiring wearing of a seat belt is a violation of civil rights.

However, the safety statistics are hard to ignore.  It was estimated that seat belts saved an estimated 14,955 lives in 2017 and an additional 2,549 lives could have been saved with 100% seat belt use.  Roughly 2 out of every 4 teenagers involved in a fatal crash were not wearing a seat belt including drivers and passengers.  In fatal crashes, teen drivers were more likely to be buckled up than teen passengers (49% vs 35%). Overall, passengers have lower rates of seat belt use for all ages.  Seat belt use continues to be the lowest among back seat passengers.

Further, any driver who is stopped by a law enforcement officer for a traffic violation and is not wearing a safety belt can be fined $25.

In Massachusetts, any child under the age of 8 and less than 57 inches tall must be in a car seat or booster seat when in a moving vehicle.

So “Click it or Ticket” in Massachusetts alone, is a little misleading.  Yes, it is the law in the Commonwealth that you must wear your seat belt, but No – you won’t get stopped by a policeman, solely for not wearing one.

The best way to protect yourself in a crash is to always wear your safety belt.  Safety belts save lives for both drivers and passengers.  During a crash, being buckled up helps keep you safe and secure inside your vehicle.  Airbags are designed to work with safety belts and do not replace them.  If you are not doing this already, get in the habit of putting your safety belt on every time you get into a vehicle, and ask your passengers to buckle up.

In Massachusetts, the violation of the child seat rules is inadmissible as evidence of contributory negligence in any civil action. M.G.L.A. 90 § 7AA.   This law states as follows:

Unless required to be properly fastened and secured by a child passenger restraint under the preceding paragraph, a passenger in a motor vehicle on any way that is under the age of 13 shall wear a safety belt which is properly adjusted and fastened according to the manufacturer’s instructions. …

A violation of this section shall not be used as evidence of contributory negligence in any civil action. …

Similarly, the fact that a victim is not wearing a seat belt is insufficient to be submitted to a jury, unless the failure to wear a seat belt was causally related to her injuries. Shahzade v. C.J. Mabardy, Inc., 586 N.E.2d 3 (Mass. 1992).

In the case of Shahzade v. CJ Mabardy, Inc., the plaintiff was not wearing a seat belt at the time of the accident.  The judge found the failure to wear a seat belt was insufficient to warrant submission to the jury on the issue of comparative negligence. There was no evidence that plaintiff’s failure was causally related to her injuries. In the absence of any such evidence, the judge properly refused to submit the issue to the jury, as the jury would have been left to speculate as to whether the plaintiff’s failure to wear her seat belt contributed to her injuries. See, Zezuski v. Jenny Mfg. Co., 363 Mass. 324 (1973)

In Massachusetts, you are required to buckle up for safety riding in a vehicle. Statistics are overwhelming that failure to wear a seat belt leads to increasingly higher numbers of deaths and serious injuries if you are injured in a car accident.  Despite the requirement to wear a seat belt in Massachusetts, you can’t be pulled over by police simply for not wearing a seat belt. There has to be another reason the cops pull you over such as running a red light or speeding.  Only then can the police ticket you for failure to wear a safety restraint.

When someone is injured in a motor vehicle accident, whether you are wearing your seat belt or not, it is important to contact a local personal injury law firm to discuss your rights.  As a victim of an accident, make sure everything is done to protect your interests. The lawyers at Nadeau Harkavy LLC help victims and their families recover compensation in serious injury and wrongful death cases arising from car crashes and other accidents. If you have any questions about your legal rights relating to a car accident, wrongful death or other accident, feel free to contact us for a free consult today at 617-674-7640.