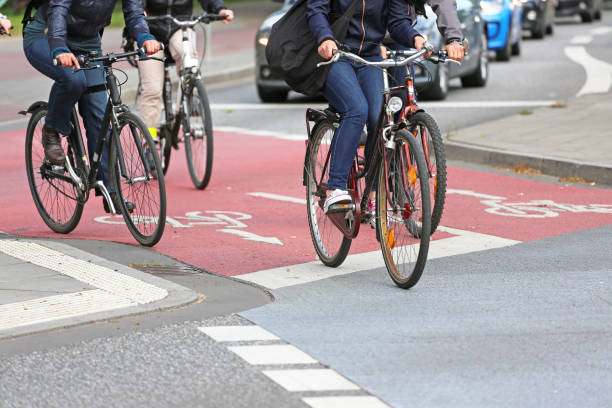 Bike Lanes in Cambridge a Source of Controversy

According to wickedlocal.com, bike lanes in Cambridge are one of the most controversial subjects in the city. Some residents feel the city should do all it can for environmentally friendly mode of transportation. Others feel bike lanes have gone too far by removing parking and creating narrower roads. Some have voiced objections saying there is more room for bicyclists and less room for drivers and argue the cyclists should pay insurance like motor vehicle operators.

What are Bike Lanes and Why are they Important?

Bicycle lanes are marked lanes in the public right-of-way that are by law exclusively for use by bicyclists. Bike lanes in Cambridge have bicycle symbols and arrows, showing the correct direction of travel. Motorists are not allowed to travel in bike lanes and are subject to a $100 fine if they do so. They are allowed to cross the lanes to turn or to park. Cyclists are still permitted to travel in the regular vehicle travel lanes even when a bike lane is present. Cyclists should signal and make sure they have the attention of the people behind them before moving into the vehicle travel lane from a bike lane. Motorists should be aware that cyclists may merge into their lanes in front of them to avoid an obstacle or to make a left turn for example. Bike lanes make city streets safer for everyone.

Bike lanes have improved safety in terms of both number and severity of crashes in cities throughout the United States. Also, cyclists practice safer bicyclist behavior. Cyclists are more obedient to traffic controls and there is less wrong way and sidewalk riding.

The premise of Cambridge bicycle transportation planning is that all roads are bike ways. All streets in the city are places where safe bicycling should be enabled. This is important because many destinations are located along major streets such as stores, schools and restaurants.

What are Separated Bike Lanes and Why Do They Increase Safety?

A separated bike lane refers to a bicycle facility with a physical separation from the motor vehicle travel area, often through barrier or grade separation. They are protected bike lanes typically located between the street or parking lane and pedestrian sidewalk.

Research shows that separated bicycle lanes increase safety, supporting the city’s goal of creating more equitable transportation opportunities for people of all ages and abilities. The benefit is reduced crashes and decreased overall injury risk and fear of collision.

The most common types of bicycle-motor vehicle crashes in Cambridge are:

Other dangers for bicyclists are:

Most crashes are the result of driver inattention.

Cambridge Police confirm that the total number of crashes in the city has declined since early 2000’s even as populations and number of road users have increased. However, crashes involving cyclists increased by 28% from 2000 to 2015 corresponding with increase bike ridership.

Cambridge City Council passed the Cycling Safety Ordinance in April 2019 with a commitment to build permanent bike lanes whenever improvements are made to streets including the city’s 5-year sidewalk and street reconstruction plan. The bill requires protected bike lanes on all city streets. The passage of this bill identifies the city of Cambridge as one of the most-progressive safe-biking cities in the country. The city cycling ordinance requires city streets to be upgraded to include the safest bike paths whenever a roadway is reconstructed.

Mayor Marc McGovern said in a statement that the Cycling Safety Ordinance codifies a lasting commitment to the users of roadways that Cambridge intends to have a modern, safe and accessible network of separated bicycle lanes for all residents regardless of their age or ability. Cambridge Bike Safety, a bike advocacy group, planned to lobby the city to adjust its construction schedule to increase the pace of change on streets included in the city’s bike plan.

City Councilor Dennis Carlone said Cambridge was the 4th most dense city in the country making bicycle use most appropriate in the city. Some believe the ordinance will place the city of Cambridge on par with some European leaders on infrastructure and ridership.

The Boston Globe reported on August 18, 2020 that a bicyclist who died in a collision with a tractor trailer near Harvard Square was a grim reminder for community activists and cycling advocates who long call for safer streets. Jan Devereux, former Cambridge City Councilor, noted that Harvard Square is old, narrow and congested and 18 wheelers were not designed to come through that space.

The truck struck an older man on a bike near the intersection of Massachusetts Avenue and Dunster Street, a short distance from the MBTA Red Line at Harvard Square. The truck was traveling on Mass Avenue away from Harvard Square toward Johnston Gate, the entrance of Harvard Yard. This death was the sixth bike fatality in 2020 according to the executive director of the nonprofit Mass Bike. In 2019, there were six bicycle fatalities for the year in Cambridge.

The increase in bicycle fatalities was partly attributable to the change in bicycle habits during the pandemic. Also, it was noted that too many highways and streets force big trucks and bicyclists into the same lane. Statistics show cycling deaths from crashes with motor vehicles largely on the rise in Massachusetts since 2013. In 2013, there were 6 fatalities; in 2014 there were 8; 2015 there were 12; and 2016 there were 10 according to Massachusetts Strategic Highway Plan.

A pedestrian fatality occurred less than a year before the August 2020 bike fatality in nearly the exact same spot when a large boom truck struck a pedestrian. According to the Harvard Crimson, in September 2019, 67 year-old librarian Sharon Hamer was struck and killed by a truck as she was crossing the street. Harvard Square is almost always full of pedestrians and cyclists crossing the irregular intersections.

The new layout includes widened bike lanes with flexible post bollards on Massachusetts Avenue in Harvard Square. This was implemented following the death of Darryl Willis who was struck and killed riding his bike without physical protection.

Protected bike lanes save lives by preventing almost 40% of crashes including doorings, sideswipes and front and rear collisions. Most protected bike lanes in the network will be required to be built in about 6 years by May 1, 2026.

The City of Cambridge Watch for Bikes Brochure offers the following advice for those operating motor vehicles on city roads:
Look before turning
Look before opening a car door
Look before entering a main street
Look before proceeding from a driveway or side street.

As for those cycling, they should be aware of their surroundings and other road users.

Also, cyclist must yield to pedestrians at crosswalks and share paths.

Also, cyclists should have lights at night so people can see them.

In Massachusetts, all bicyclists must obey all traffic laws including red lights, stop signs and ride with traffic. All bicyclists are expected to stay to the right of the roadway except for left hand turns or where bike lane directs otherwise.

Cambridge discourages riding bicycles on sidewalks and pedestrians have the right of way on all sidewalks.

What are the Driver’s Responsibilities Sharing the Road with Cyclists?

1. Ride cautiously and slowly. Stop at lights and yield to pedestrians.
2. Be visible. Use front and back lights.
3. Avoid large vehicle blind spots. Buses and trucks haver large blind spots on either side and front and back. Try to stay out of blind spots. If you cannot see the mirrors, driver likely can’t see you.
4. Avoid doors. Try to ride as far from parked cars as possible.
5. Pass another person riding on the left.

Finally, commit to follow the Street Code whether you are a bicyclist, pedestrian, vehicle operator, or public transport.

The Cambridge, Massachusetts Street Code is:

1. Slow down.
2. Put yourself in someone else’s shoes. Don’t assume the worst.
3. It is about all of us. All of us are trying to safely get somewhere.

When a bicyclist is injured in an accident with a motor vehicle, a thorough investigation of the accident events is necessary to determine the cause of the collision and secure important information. As a victim of a bike accident, make sure everything is done to protect your interests. The lawyers at Nadeau Harkavy LLC, located in the heart of the City of Cambridge in Harvard Square, help bike victims and their families recover damages for their losses in serious injury and wrongful death cases arising from bicycle accidents throughout the state of Massachusetts. If you have any questions about your legal rights relating to a bicycle accident, wrongful death or other accident, feel free to contact us for a free consult today at 617-674-7640.